I Just Saw Myself on Television

I was on the local news because today. John Edwards came to Iowa City. 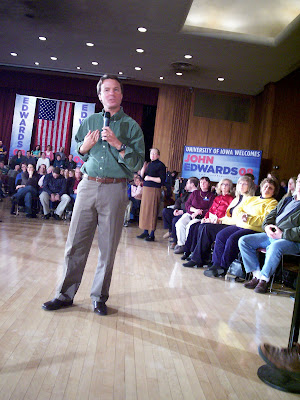 He spoke for a few minutes and then took questions, including one from Jennifer on prescription drugs and pharmaceutical lobbies and their power in Washington. It was an obvious jab at Hillary Clinton and the fact that, not only has she taken tons of money from lobbyists, one of her big supporters are pharmaceutical companies. So much for the "Health care for everybody" days for her husband's administration.

He didn't really answer the question, but he did say, "I have never taken any money from the lobbyists." Now, I don't know if it's true or not, but it seems like a bad thing to lie about.

What I liked about Edwards was his honesty and his candor. No, I don't agree with Edwards on the issue of gay marriage, but I appreciate that it's causing what he called a "conflict within" himself and that he spoke about it. 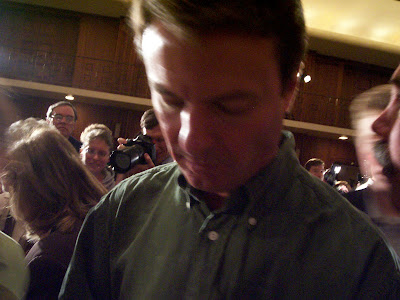 Afterwards, just after he signed Jennifer's notebook, I shook his hand, then grabbed his arm and told him that while I didn't agree with everything that he said, I appreciated that he took the time to say it. Susie, the friend with us, agree that he looked at me very intensely, happy that his concept had worked on at least one person.

It's kind of blurry now, but right around this time, we handed out fellow Southerner a Southern delicacy: 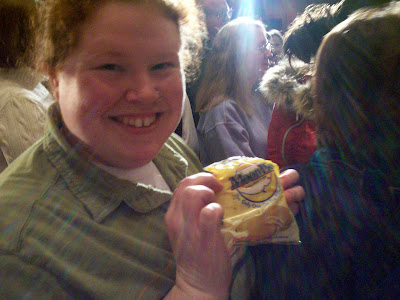 That's Susie with the Moon Pie we'd held onto for her that I convinced (read: forced) her to give to Edwards. He laughed, saying he loved Moon Pies, and I told him we thought it perfect to give to a fellow Southerner, and he laughed again. He then handed it to an aide of his.

Susie and I played out what we believed the conversation would be later:

Edwards: So can I have that Moon Pie?
Aide: You wanted it?
Edwards: Ugh, yeah. Do you still have it?
Aide: Um, no I threw it away.
Edwards (lowering eyes): You bastard.

At this point, Edwards either fires or maims the Aide.


We also met and shook hands with his wife. They both signed Jennifer's notebook: 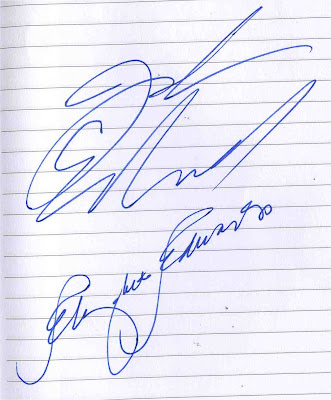 Great moment from the beginning: Mrs. Edwards was fielding a question (something on what she would be doing while First Lady, as opposed to Tipsy Bush's current job) and her husband stood quietly by. A moment later, I could see him eyeing her leg, and then the crowd, and then her leg again. I noticed too: her pant leg was up above her sock.

So he did what any husband would do and fixed it! She then kissed her husband and thanked him.She laughed, saying she could feel it, but that there was nothing she could do about it. It wasn't a fake Tipper/Al Gore thing, or even a Michael Jackson/Lisa Marie thing. It seemed real, like to *real* people that are married.

My friend Bobby, now living in D.C. with hopes of a job in politics on the horizon, stated he likes Obama now more than Edwards. I must admit I do like Obama, but Edwards to me seems like he's used his time off wisely: He's travelled and done some good and interesting things. I think he's ready for the top of a ticket now.

So if one of Edward's folks is reading this, you've got my vote.
Tags 2008 Elections, Iowa, John Edwards, Moon Pies, Television