A Photo I Took

In April of 2010, Keith Waldrop wandered down into Demitasse, a semi-formal gathering of students and faculty of Brown's Literary Arts Department. Keith, being diabetic, isn't normally allowed to have cookies, etc., but on Thursdays, he'd sneak down during his purposely-scheduled office hours and steal a cookie. On this day, as a first year M.F.A. student, I was in charge of Demitasse and Keith sat down in a chair.

I snapped this picture of him as he sat in front of me. "Do you mind if I take your picture?" In his typical chill manner, Keith said "Of course. Just don't tell Rosmarie I had a cookie." I'm sorry to break your confidence, Keith. 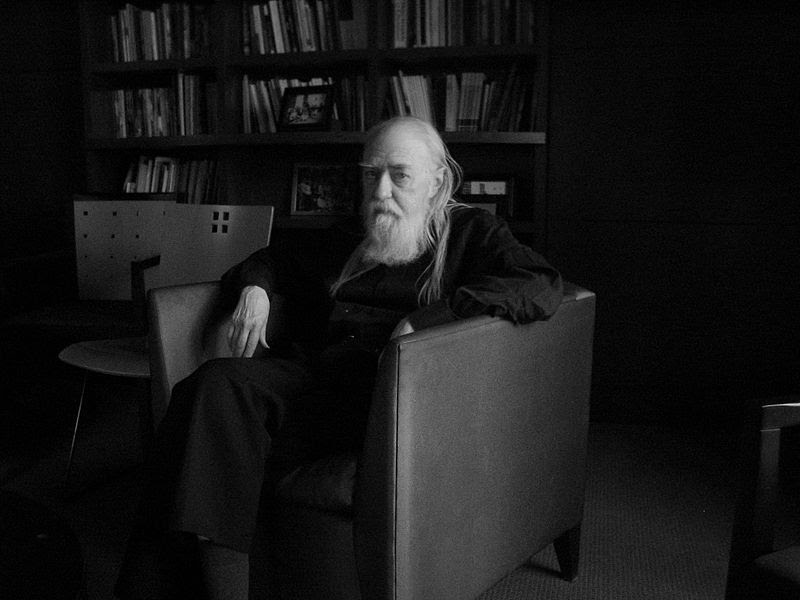 Last October, I was editing Wikipedia pages related to Brown's M.F.A. program and realized I had the perfect pic of Keith, so I uploaded it to Wikipedia, with the understanding that, no, I couldn't charge money for others to use it, but I could at least be credited as the creator of the photo.

This past Thursday, I woke up at my regular early time for work, which is 75 minutes away. My friend and fellow Brown alum, Mark Baumer, texted to ask "Is that your pix of waldorp in newyorker (sic)

I had no idea what he was talking about, but upon opening my eyes wider, I Googled "Keith Waldrop New Yorker" and found Ben Lerner's beautifully written article on The New Yorker's Blog. And there, at the top, was my photo of  Keith, taken a rather dull afternoon where hardly anyone showed up to have the strong coffee I had made. I scrolled down, excited that, maybe, my name or something would be at the bottom of the page. When I got there, all it said was "Photograph via Wikimedia Commons."
This was my "Be Sure to Drink Your Ovaltine" moment. Why didn't they, at the very least, say "This is the work of random Wikipedia user Atrivedi?" On this, the Permissions folks at Wikipedia agreed: when The New Yorker used Wiki's photo, they ought to have credited the author. They can use it for free, surely, but not without giving credit where credit is due. "The main difference," they wrote me, "between public domain and the CC Attribution license is that re-users are supposed to attribute it in the manner you request."
The manner I requested is, quite simply, my username, Atrivedi.

Twice now, I've written The New Yorker using their "contact" link and form, the same link that surely every crackpot and hopeful author uses when submitting their work. Seemingly it is a black hole as I have not heard back from them in two days.

Wikipedia/media has, conversely, been awesome. From sending links to back up my point to just taking the time to check it out, Wiki's Permissions crowd has been on it from the moment I wrote yesterday.

Wikipedia wrote (to me):

"Politely point out that while text can simply be attributed as coming form Wikipedia, images requires a specific attribution to the author where the author is identified) per the terms of use of material at Wikimedia Commons.

Those terms aren't quite as specific as I would like. It states: "You are free to:...Share and Reuse our articles and other media under free and open licenses. "

You have to look at the license:

to see "Attribution — You must attribute the work in the manner specified by the author or licensor (but not in any way that suggests that they endorse you or your use of the work.""

I'm not asking for money, I'm not asking for it to be taken down. All I want is credit for my creative work, which is something that I've now posed to the author of the article and fellow Brown M.F.A. alum Ben Lerner. "I just see it as something beautiful I created," I wrote, "that's not attributed to me. If it were a poem, I'd fight tooth and nail for it. For this photo, all I'm asking is your help."

To be perfectly honest, it will probably be a while before The New Yorker publishes a poem of mine...maybe they never will. If my work here is good, it seems I should receive a nod.

Edit from last night around 10:10pm: Ben Lerner has been kind enough to write the person who solicited his work to see if they could help me out. Fingers crossed!