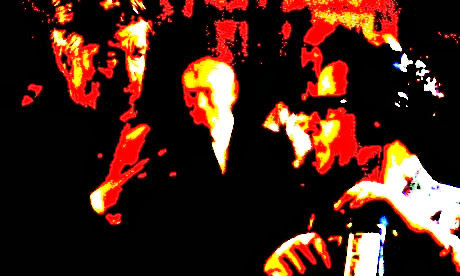 Surrealists have been living and dying on Gerard de Nerval's opening to Aurelia: "Our dreams are a second life." It is a concept so central to surrealism that one can hardly contemplate escaping it. What happens when one falls asleep is the essential makeup of any surrealist work and nowhere more than in the films of David Lynch. If Ashbery can be considered the offspring of poetic surrealism (a highly debatable claim) then Lynch is at the epicenter of contemporary surrealism, perhaps even globally.

Basically all of Lynch's screen work has dealt in dreams, even the outlier The Straight Story, which is about a man's journey to see a dying relative. Even in that work, Lynch's strange Americana is depicted and the very plot of the story seems like a dream experiment, riding a tractor for great distances in an attempt to see someone before they pass. However, the work most exemplary of surrealism and permutational aesthetics must be 2001's Mulholland Drive, a strange nightmare that covers over unpleasant activities in the waking life.

In the first part of the film, we meet the doe-eyed Betty, a young actress who is passed over for her shot at stardom due to the underground activities of a mysterious man (played by Michael Anderson, Lynch's Man from Another Place in Twin Peaks) and his representatives (one of whom is Lynch's dreamy composer, Angelo Badalamenti). In the cryptic repetition of the line "This is the girl," the director (played by Justin Theroux) is forced to take on an actress for the role that he does not want. In fact, he looks longingly at Betty when she is in the studio but cannot pick her due to the direct threats he is up against. Everything is falling apart for this fellow.

The other part, of course, is the finding of the amnesiac Rita who accidentally makes her way into the home that Betty has kindly been lent by her aunt. Rita is the survivor of a car accident but cannot remember said accident or much of anything, in fact. Betty takes the ailing Rita in and the two eventually become lovers and things are going magically well for Betty, despite her not getting the role she was destined for and whatever horrible things happen to those around her (the poor director finds his wife in bed with Billy Ray Cyrus, which is horrible for everyone; two men in a diner discuss a nightmare scenario actually going on in the film and one ends up dying!).

Of course, the whole thing is a sham: this is desperate actress Diane's reconstructed dream world wherein she is the innocent and well-meaning young hopeful (which she probably was at some point before being corrupted by the horrid ways of Hollywood) and where Rita is nursed back to health rather than killed off for jilting the madly in love Diane. 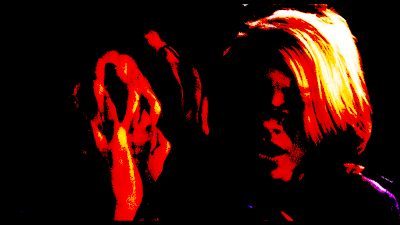 After Betty and Rita open the blue box, the film shifts and we see what has really been going on: Diane has her lover killed, not only for leaving her for the director (who for whatever reason is forgiven by the dreaming Diane- remember that he is being threatened by cowboys and Billy Ray Cyrus punches him), but also for being "the girl" that gets the role she not only covets but feels is rightly hers. The man she hires, who is hilariously incompetent in her dreamworld (having to kill a second person because he accidentally fires a gun while attempting to make another hit appear to be a suicide), hands her a blue key which makes its way into her dream reconstruction.

In fact, many elements make their way into her dream: the cowboy, the random woman who is the aunt (which is similar to a scene in Twin Peaks where Donna goes to a home, only to find a different interior with someone different living there with the same name), as well as various objects which are too numerous to mention. Of course, in the dream, everything is idealized but reality has a way of sneaking through. Her real name is given to a waitress from whom the waking Diane stole her dream name. They see a dead bloated body in  what we come to realize is waking Diane's apartment and clearly her body at the end when Diane can no longer live with her actions.

In hiring someone to kill her lover, Diane creates an escape in her dreamworld from the horrors of her waking life. Lynch, of course, wants the viewer to believe that the dream life is real (even though the beginning is so clearly a dream) until he washes it away by sucking Betty out of it but one can never quite escape reality, in dreams or in art, and Lynch plays on this duality throughout the film by breaking down the barriers of Diane's dream for Betty to discover. Dreams may be the second life but the first life has its place among the ephemera of the constructed existence and ultimately this causes Diane to not only awaken but leads her to take her own life.

This is naturally at the heart of permutational art. Arts allows us, in an external form, to recreate idealized versions of past events. In Diane's case, she creates a permutation in her dream to deal with the issues she is naturally dwelling on in her waking life (her lover, her career, etc.). It makes sense that by the time one hires an assassin, one has spent an inordinate amount of time dwelling on the slights and wrong-doings one feels has been done to them like Montresor in "The Cask of Amontillado." Diane, of course, must re-enter reality with the evidence of what she has done when she finds the blue key left by her hired killer on the coffee table. It seems he is much more capable in real life, much to dreaming Diane's consternation. Any hope that Camilla might be alive vanishes and ultimately, Diane cannot live with her actions. The idealized dream life seems to make the situation worse as Diane contemplates the alternate stream of existence that she created.

It seems more and more as if the event of Camilla's death occurs the same night Diane sleeps and dreams this dream. Her dream life attempts to worm its way out of the act of murder that she has set in motion. She hopes that Camilla survives but wakes to find she has not, but not because she does not want her dead but rather because she does not want to be the cause of her death. The guilt ultimately is overwhelming for Diane and while an escape back into the dream construction could have made a perfectly reasonable ending, for Lynch, there is only one way out.
Tags aesthetics, criticism, Films, Permutations
Newer Post Older Post Home