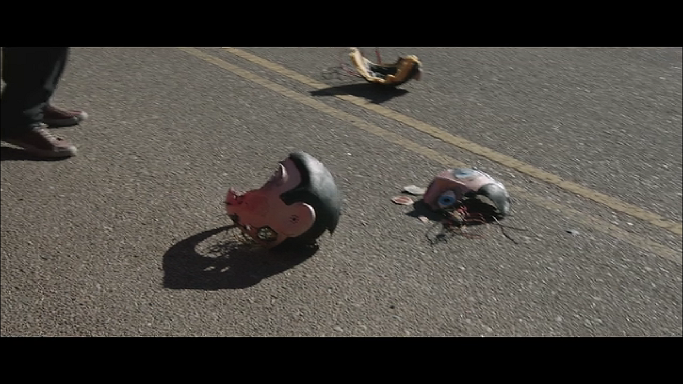 "What truth can you as an actor tell with a mask that you can't tell with your face?"
-Stephen Colbert, The Colbert Report


I was rather leery of seeing Frank. I watched Colbert's interview with Michael Fassbender (whose mask above is shattered and to whom the above question is posed) and heard the make-shift band of the film perform "I Love You All," which I did not initially care for. However, seeing the lifeless eyes of the Frank mask on Netflix as I logged in drew me towards the film. What was it about acting behind this mask that worked for Fassbender, who claimed to have loved acting behind it? What was it about that song that kept me thinking about the interview and the tune itself that I had to see it?

At its heart, Frank is a film about mental illness and the mask that we as a society ask those with among us mental illness to wear. Frank the character is able to cope, to survive, because he's made every sacrifice to live beneath the mask. He's stopped eating solid foods and, based on the frequent description of his facially moves beneath it, he has ceded much of who is to the mask because, without it, the world is simply too much for him to deal with as a result of his illness. Jon, played by Domhnall Gleason, knows about Frank's mental illness in an objective but when finally frustrated with its emergence while at South by Southwest, Jon attacks Frank for wearing it, causing him to run into the street, be hit by a car, and then run off with his mask left behind.

The mask and the other members of the band Soronprfbs are a necessary wall of ambivalence around Frank, gathered not so they could protect him but so they he could utilize their lack of ambition as a safe-guard against exposing his mental illness. It is not Jon's attempt to remove the mask that leads to Frank's breakdown: it is Jon's addition to the band at all. One has to wonder if Frank had some idea of what he was doing.

The film also asks what the source of creativity is. With the mask on, Frank finds inspiration in all things and is able to channel that inspiration into music. Without the mask, in his parents' home, Frank stands by the radio, still finding the inspiration, but upon sitting at the piano, nothing comes. As the mask of mental illness has cracked, Frank feels he is unable to create, regardless of what moves him.

There is some redemption for Jon and some good hope for Frank in the end, however: by rejoining his band mates playing for no one at all, he is able to see that he can still create, still use the world around him to inspire him to write lyrics and sing. Jon leaves them well enough alone, walking away without a word at the end, understanding finally that Frank is best when surround by the creativity he seeks but safer when away from the stardom he feels Frank deserves. Frank is content to play forever in this place, as are his colleagues.

So, the original question, which was posed by Colbert as based off an Oscar Wilde quote, "Give him a mask, and he will tell you the truth," asked Fassbender to consider what he as an actor felt the mask provided him. Fassbender jokes about it, saying it got him away from working, but I think the answer would have been too nuanced for the few minutes Colbert's show provides.

Acting when your facial expressions are not visible must be quite difficult, no doubt, but perhaps the truth to be known here is more about Frank's change from avant-garde genius to anguished recluse. I am curious how Fassbender portrayed this. His acting is no doubt amazing in the film and is certainly one reason to see it.

I am very curious about Colbert's question. I wish I were capable of answering but never having acted in my life, I am out of my element here.
Tags criticism, Films